We had a little treat at the math department for Pi day: 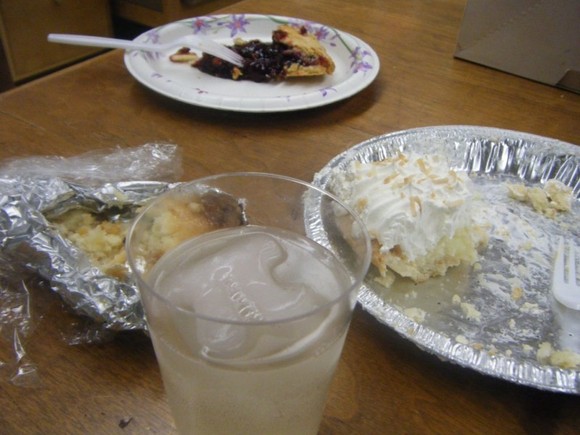 I also have a treat for you. Here’s a little Java I threw together that maps the first thousand digits of Pi to keys on the piano. Warning: I don’t know why sound continues from the applet even after I navigate away, so be prepared to restart the browser to shut up the sound. That said, I think it sounds quite soothing, and of course since the sequence never repeats itself, you theoretically should never be dull of it 🙂

I had intended to post this a little earlier, but I was volunteering at a science and math conference for the whole day and haven’t had a moment to spare until now. Here is the source code; though the code that’s linked from the applet page is similar, (couldn’t upload it to Geocities due to scary file extension) that one is actually meant for Processing, which is what I used to export my code into an applet with a click of a button, not that I prefer clicking buttons though. I think the knowledge of creating an applet should be elementary, but I just wanted to pack what I had quickly before Pi day was over!

Anyways, hope you enjoyed your Pi day today. And for the parting fact: Albert Einstein’s birthday is today as well. Isn’t today such a nerdy day?

Recently I wrote up my first paper in

for differential geometry class about the Gauss-Bonnet theorem, which states that:

is a compact surface,

is Gaussian curvature, and

is the Euler characteristic, a magic number defined by taking a mesh representation of the surface, adding up all the vertices and faces, and subtracting all the edges. It was pretty interesting to read up surface modeling, solid modeling, and subdivision algorithms used to generate the smooth surfaces, though it felt pretty simplistic because the theorem turns the problem of dealing with a surface into a counting problem. But it was cool and of course I learned a bit of

along the way. This post is just to test out WordPress functionality of displaying math (:

Under OS X, I installed the MacTeX distribution, which got everything working right out of the box, and I wrote up the article in TeXShop. I think getting started with LaTeX calls for grabbing a LaTeX distribution, which has many components to it, TeXShop being the frontend component of it. Without knowing much, I used a template, looked at a syntax guide included with TeXShop, and glanced at some sample documents typed up by my friends, and I had everything to put together a short 6 page paper.

Now that I know LaTeX works, I think it’ll be fun to write up some math tutorials, show off problems that I have, and insert equations wherever they don’t quite belong but would look pretty!