Forum FAQs like to remind us to search previous posts and check with Google before posting: chances are that the answers are already out there. It’s true, but it takes some will to dig and some idea of what to find.

I am trying to build Violet UML editor from source, and building with maven seems pretty straightforward, pointing out missing dependencies as well as generating the command to splice it into the build once I fetch it myself. I had a heck of a time tracking down this one JNLP package for Java, which exposes some additional API in javax.jnlp.*. It was so confusing because everywhere I looked – the Gentoo packages, the Java Ranch forums – all pointed to Sun’s website for download. The only download available was the Java SE, which I had but obviously didn’t have what I was looking for since I have the build error, right? After much digging, I finally found the JNLP developer pack, which after Java 5 is included under the *samples* in the JDK. That could have been much easier.

In other news, I took a shot at using my Freerunner as a PDF reader today. I installed epdfview, a lightweight PDF viewer, but it was barely readable because I was in portrait mode. I assumed that the program would come out in landscape mode, but when I tried it and it didn’t, I assumed it was due to the Gestures program that detects the orientation and automatically rotates the screen to match. Digging deeper, I find that there’s actually a command to change the orientation of the screen!

0 is the default orientation (right side up) and it goes clockwise from there. 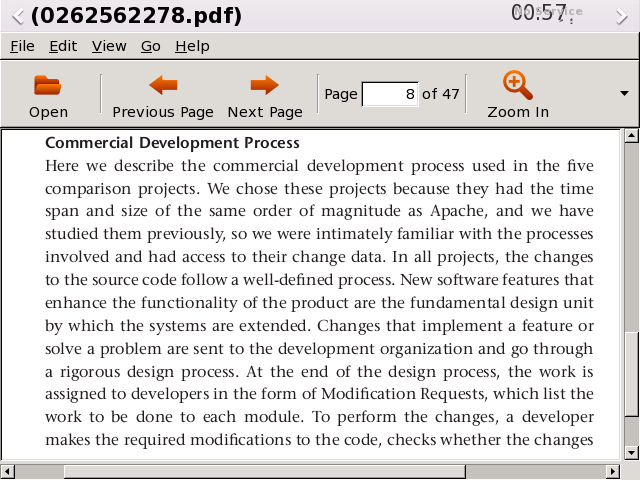 The result is more lateral real estate and nicer reading experience. The big fat toolbar is open because I need the page scroll buttons since epdfview doesn’t have continuous page scrolling. I may just try evince later to try and really optimize the screen space, but it’s already as wide as it can get, which is okay.

In the end, it boils down to (1) whether you care enough to bother looking and (2) whether you know what you are looking for in the first place. Sometimes it just takes a while…